165 Views Posted on: 14/03/2018
By Wad agency
We are always happy when we receive feedback from our customers. This helps us improve, and in perfecting our firearms. And we are especially happy when we receive a positive feedback like the one we received from Thomas Klaner. Best regards, The Pedersoli Team   Dear Pedersoli Team, First of all I like to thank the Company Davide Pedersoli & C. for their support and generousity to provide me with the “New Barrel” for this project and my special thanks to Mr. Pierangelo Pedersoli. Thank You! My Waadtländer has been built in 1992 and was the rifle of my dad. In the following years, with my growing interest in Black Powder shooting, I learned to shoot with one of the most accurate rifles for 50m percussion tournaments, the “Waadtländer”. It is a cal .45 barrel with a 1200mm twist and a length of 782mm. I used a .451 maxiball bullet greased with Eucerinum cum aqua. Until last year the barrel was loaded and shot about 15.000 times and it got a “used” look so far. After my last big tournament in 2017, the European Championship in Granada, Spain (Team Championship with the event Pforzheim), I decided to renew this awesome rifle with a new barrel.

Davide Pedersoli provided me with a new “Bristlen A. Morges” barrel, cal .35 with a twist of 450mm. When I received the barrel it came with a ready installed front sight and a new bascule, a new nipple, a new and sized ramrod with its holders. After assembling the new bascule I put the barrel into the stock and it fitted perfect in. The only thing to modify was the holding latch at the bottom, front of the barrel because the Waadtländer had an overlap of 1,8mm to the position of its bolt. This was done with a quick stoke of a file until it fitted perfectly in. The damaged surface I repaired with a quick bluing. After oiling everything up the barrel was fixed in the stock and the gun was ready. Estimated working time about 1h and waiting until the bluing was fully hardened of 48h. The bullet I decided to be used is about 8.89mm diameter and has the weight of 236 grain. It is about 26mm long and made of pure lead. It has 5 rings on this bullet to carry the grease. 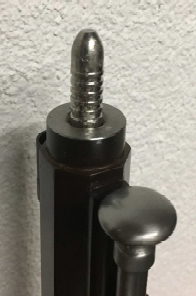 At the shooting range: Cold but clear view, -5°C, the Test starts with different loads of “Schweizer Schwarzpulver no. 2”, later called CH no.2. Greased with Eucerin cum aqua. 19 grain, 25 grain, 30 grain and 35 grain with bullets straight out of the mould. Even the first shot is directly on the target and I get a group of 10 cm diameter. The biggest Load of 35 grain gets the best results of 5 cm. The next test starts with 30 grain CH no. 2 but calibrated bullets to size of 8,8 mm and the results are again 50mm of diameter. All Shots are free hand because of having the same recoil and vision of the sights. Different Greases have been tested and had no influence on the results of the accuracy, just the cleaning was way easier with some products. The latest training with the rifle went out very well and the result is shown below (Picture1). It was an honour and fun for me to test this barrel, if you got any questions, do not hesitate to contact me. 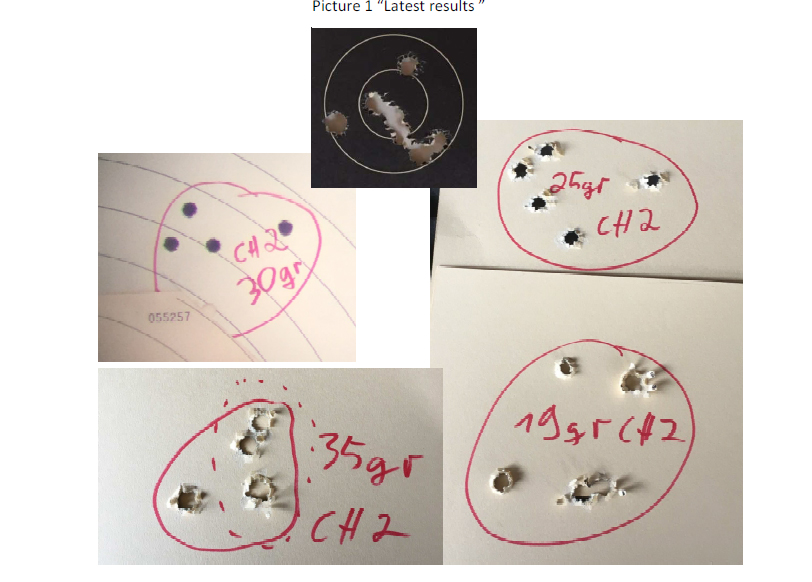